One of my favorite bits of the recent stuff I've gotten from DreamForge is Ada, Little Lady with a Big Gun. Kitted out in Eisenkern stormtrooper armor and armed with what Mark Mondragon calls a "capacitor rifle", Ada has trained herself how to fire such a large weapon and braces herself against the recoil so that she slides back several feet with each shot. That's just plain old double-tough. 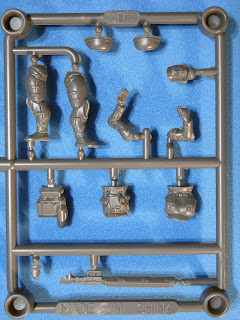 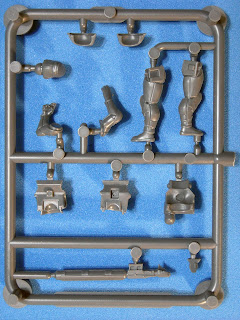 The Ada miniature comes on one sprue and contains both the capacitor rifle and a backpack. Casting was beautiful on this piece and assembly was very straightforward and simple. The addition of a separate crotch guard and should pads give the mini a nicely layered look. I added a few pieces from the accessory set to add a sidearm, PDA, and first aid kit to the mini. And a couple of crates made a quick bit of cover for Ada's base. 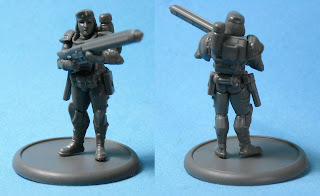 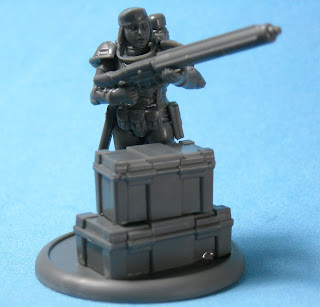 Besides being simple to construct Ada was very quick and easy to paint. There's enough detail on the armor pieces that light drybrushing really makes them pop. I didn't take the time to try for the digital camo pattern that DreamForge shows on the pouches of its digital models but someone with better eyes than me might have a go. 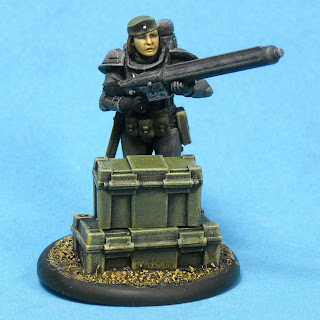 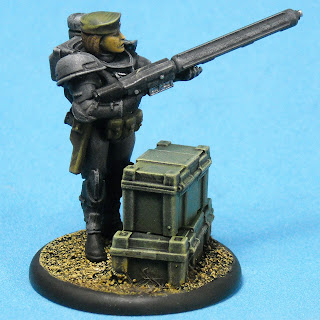 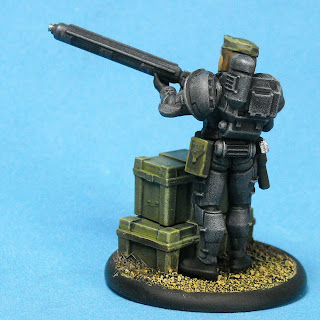 And finally one of my favorite things about the Ada miniature is that she looks like an actual female soldier and not a stripper with a rifle. Although I have nothing against the Heavy Metal, chainmail-bikini clad, battle-hooker look that so many miniature companies seem to go for it is very refreshing to see a miniature of a female that looks at least somewhat realistic when compared to its male counterparts. So there.

At one time mules, the actual animal, were important to squads of soldiers. They could carry a lot more equipment than a single human and allowed soldiers to be less encumbered while also keeping then well supplied in the field. Later various types of mechanical devices were called mules due to their ability to move and carry military cargo. Everything from small electric tractors used to move aircraft ordinance to multi-wheeled cargo vehicles have been dubbed mules.

Now the development group BostonDynamics along with DARPA are developing the next stage of military mules, the BigDog.

Using this as a starting point DreamForge games has included a model of a slightly more advanced mechanical mule with their set of Stormtrooper Accessories. These detailed little kits are outstanding and offer a lot of poseability and options for conversion. The only nitpick I have with them is the fiddly nature of the legs. Parts this small are a pain to work with using my stumpy fingers and cleaning the mold lines from them will be a chore. However the multi-part nature allows them to be posed much more realistically so it's a fair trade off. Just be wary and work in sub-assemblies. And make sure the legs are totally dry before trying to glue them into the main body. 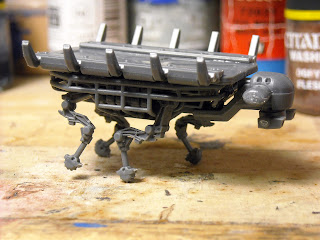 The cargo "claws" are moveable so that they can be closed tightly around specific cargo. They can also be left off completely to make a med-evac stretcher, water tank, or mobile missile battery.

I added a set of Stormtrooper Accessories to my DreamForge Kickstarter order simply to get the cargo mules. At first I thought each set only contained one of these but was very happy to find that there are three. They are a bit smaller than I first thought but look great once assembled and scale well with 28mm scale figures. And the design will work well with any futuristic type of soldier and not just the DreamForge Eisenkern.

The rest of the accessories are really too numerous to catalogue here. A field computer, field PDAs, first aid kits, and dozens of pouches, packs, and bags along with guns, grenades, and knives...whew. And that's not to mention the specialized heads for officers, soft covers for troopers, various hands etc. There's so much bloody stuff on these two sprues that I don't know where to start. So I won't. But be assured if you want a lot of little greeblies to enhance your sci-fi soldiers there are plenty of options here. All of the castings are crisp, detailed, and well done.

Here are some examples: 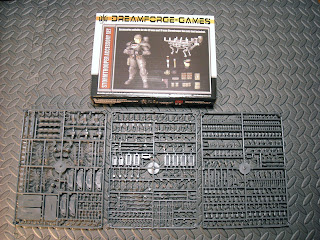 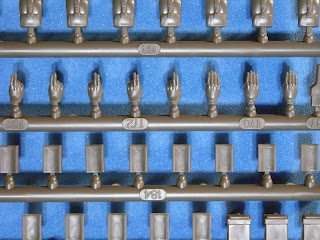 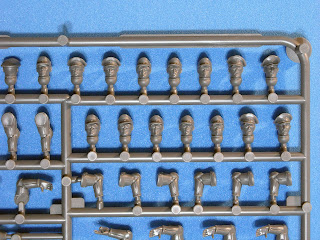 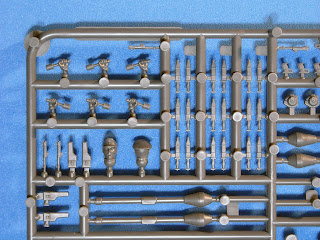 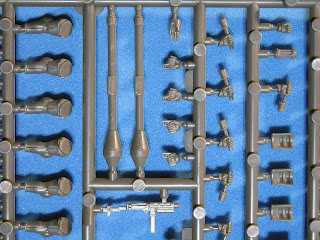 Next blog: Ada and the weird dog alien thing.
Posted by Roebeast at 9:14 PM 1 comment: 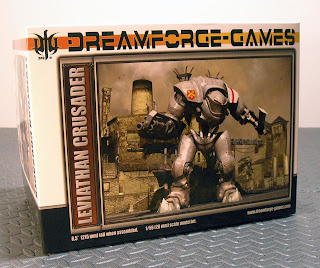 One of the coolest moments as a hobbyist happens when I see a project that makes me think that I could have designed it. Not that I'm suggesting that I'm as skilled as the designer but more that it's an idea I've had myself and not created. Pretty much like somebody reaches into my head, grabs a mental image, and then makes it real. Recently this has happened twice, first during the eagle rescue scene in Peter Jackson's The Hobbit, and next when I opened DreamForge Games Leviathan Crusader kit. In both of these instances something connected with me and shouted: 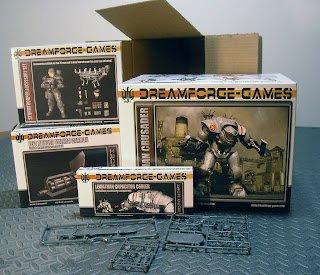 I supported the DreamForge Kickstarter campaign and chose to get a basic Crusader and the Eisenkern Trooper Accessory pack since I wanted the robotic "mule" that comes with it. I actually received quite a bit more due to stretch goal goodies so I got a couple of extra weapons for the Crusader as well as an Ada- Little Lady with a Big Gun and a Feral Shadowkesh and Handler. There was so much stuff to look through!

First up are the Leviathan upgrades: Capacitor Coolers, Excalibur Combat Sword, and Left Vulcan (this allows for both arms to mount Vulcans since the main kit already comes with the right). Nice packaging and clear images on the boxes to show how they are used with the main kit. I'm really looking forward to seeing how the "Fast Arm Swap" feature works. This will allow the arms to be removed for shipping and easily optional weapon arms. All of the parts are well cast in gray plastic and are clean and sharply detailed. Casting is equal to any plastic model kit that I've seen and the parts themselves are solid and strong. 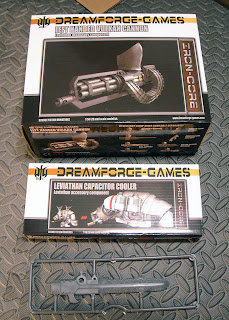 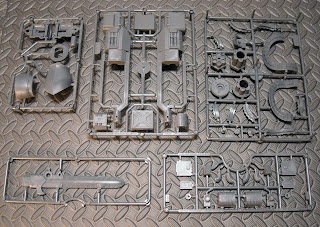 Next up I'm tackling the main monster itself, The Leviathan Crusader. This massive beasty promises to stand 8.5" once assembled and certainly the amount of parts back up this claim. There is so much plastic in this thing!

Upon opening the kit you are suddenly confronted with THE BASE. This was a bit of a shock because although I've been using plastic miniature bases since their creation I've never encountered one that nearly the size of a 45rpm record. And since it's the first thing you see of the kit it certainly lets you know that this sucker is bloody big.


I pulled out some foam and there are two stacks of sprues that use that groovy sprue connection that Wargames Factory uses. The stacks are rubber banded together so they fit perfectly in the box. The problem however is trying to remember how to stack them the same way to get them back into the box. Oh well, I took pictures. 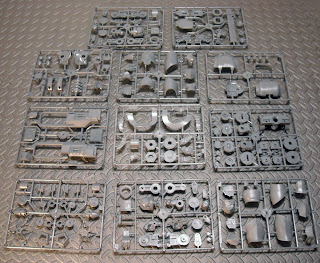 It's pretty hard to get a sense of scale for this kit but one thing I was impressed by is how simple the parts of the Leviathan seem to be. There's a good amount of detail to them and they will look great once they're put together. But there aren't a lot of super-fiddly bits to make assembly tortuous and painful. The arms and legs use a screw system so that they remain posable once assembled. And they even include a screwdriver!


Instructions seem to be clear and well illustrated with colored images showing how sub-assemblies fit together. Assembly looks to be straight forward and well designed.


Next blog I'll go over the Eisenkern Trooper Accessory Pack and the other miniatures that were included.
Posted by Roebeast at 5:47 PM 3 comments: