I've been working with my mentor Steve Lortz on republishing his great set of sci-fi skirmish rules called World Wasters. WW is simple and fast, and focuses more on having fun than rules lawyering. Steve also sculpted some great new races for WW including the Bogies, Brain Worms and Back Biters. The miniatures for these will be reissued by Fortress Figures and the rules will be republished and available for download and print on demand.

Here is my redesign of of the cover using the original art by Steve as my guide. I think mine is more subtle.

Just a couple of classic Citadel miniatures based on an article in the First Citadel Compendium. This article, called "Mark of Chaos", explained the process for creating chaos-tainted creatures and featured classic John Blanche artwork. These concepts were then sculpted and cast to produce two interesting minis that are full of personality. There was a third miniature from the article, Ngaaranh, a chaos-spawn who was once a harpy but this mini seems to be much harder to find than Zygor and Slomm. 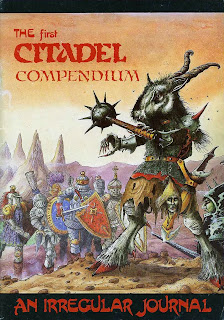 These minis were painted in my classic painting style meaning lots of washes, harsh drybrushing, and of course gloss varnish. If I had two fresh versions of these fellows I'd try something more up to date and smooth but I think this paint job "feels" right. Even with the gloss varnish there are dings and scraped paint caused by too many years of travel.

I'd really like to see Games Workshop go back and revisit concepts like these but as we know they rarely look back this far. So be it, I still think these foul little fellows are beautiful. 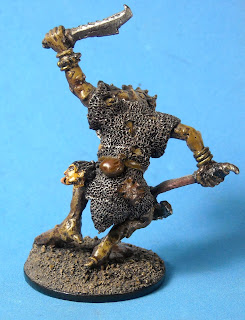 Designing A Card Building for Robotech. 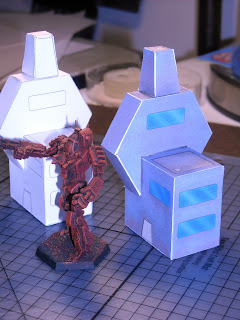 While I'm waiting for the Robotech Kickstarter stuff to start coming in I've been thinking about ways to make buildings for the inevitable city fight scenarios. There are several manufacturers that sell resin, laser-cut, or printable card models and some of them are outstanding. But while watching some of the first episodes of Macross/Robotech I decided that I wanted some buildings that look like those in Macross City. There's a sort of bizarre design aesthetic with these buildings that seems to combine sci-fi forward thinking with a basic Japanese neighborhood.

I took some screengrabs, did a few sketches and decided to start with this cool hex-topped building. Although I've done a good amount of card modeling I've never really designed my own model. Even with a building this simple there are difficulties that need to be overcome.

I started by making a quick black and white mock-up in Illustrator and printing it out. This showed several problems and after correcting them I printed another copy, this time with windows and other details. Finally I took this into Photoshop and gave it some color. The windows were handled by Ronda Pattison, one of the perks of having one of the world's most talented comic colorists working at the next desk over. 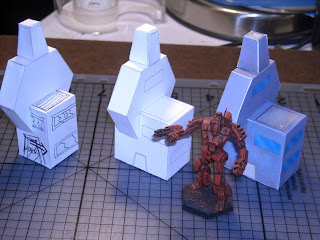 I'm only taking baby steps with this one but I'd like to keep working on new designs. Please download the attached model, build it, and let me know of any construction problems you run across in the comments. Thanks in advance for your advice.

Make sure to click this image and save the full resolution version. Print at 100%. 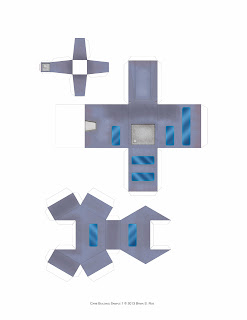