Gen Con this year was pretty amazing. Not only did we finally get to release the print version of my boardgame Zombie Plague but I had a small budget to buy some new minis with. Having some extra cash and the level of variety at Gen Con makes me feel like a kid in a candy store.

One of the releases I knew I wanted to pick up was the Zombie Vixens set from Wargames Factory. I need a good amount of horde zombies for Zombie Plague and although I'm working on having miniatures sculpted of the four main characters, the zombies are not a huge priority as there are already several companies making good horde zombies. I already have a box of the WF Zombies so I thought I'd give the female versions a try.

The first thing I noticed about this set is that the box art seems very out of date and not in a fun retro way. It just seems like the first thing they could come up with. On the back is a nice, clear picture of some well painted versions of the miniatures. This would have made a much better cover for the box than the oddly colored renders of the 3D models. And I won't even get started on the flavor text. "Bodacious, mangeled curves" indeed.
The models themselves are for the most part very good. There are some odd bits of clothing, the evening dress looks like it is sculpted of bubble gum, but the overall quality is strong. Some of the poses are more successful than others but there is a good variety of arms and heads so that several different "occupations" of zombies can be made. Waitress, business woman, policeman, cheerleader, etc. There's even a body wearing a bikini and an arm carrying a rescue float for those Baywatch fans out there. Overall the mix is good and will add to the visual interest of the zombie horde. 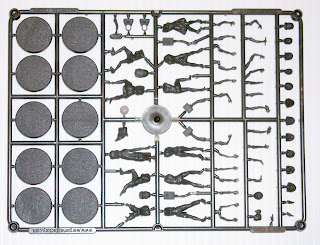 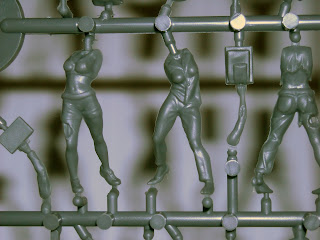 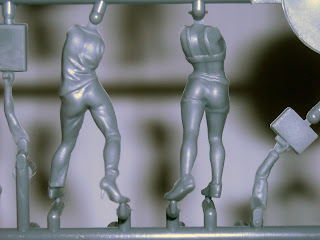 The joints for arms and heads are just flat areas. This system tends to leave gaps on the neck and shoulders that can be very obvious on the final figures. With the next batch I assemble I'll be using styrene model cement to partially melt the pieces together and hopefully fill in any gaps. Although I would have preferred a ball & socket system for the joints I understand it's probably an issue with styrene casting and it's not a dealbreaker in any case.

They were fun to paint with good horror-movie details and although I was only giving them 45 minute paint jobs they look fine on the tabletop. I tried to hold back on the blood and gore somewhat but the minis had wounds that really called for being bloodied up. I used a technique of paint and red ink washes to show how blood dries and soaks into cloth. And sometimes it's fun to just paint something really bloody. 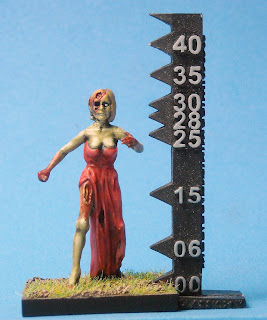 Size seems a bit on the tall side especially when compared to the previous set of male zombies from Wargames Factory. These little fellows seem pudgy and dwarfish compared to the much trimmer and taller women. But the ZV set also shows that WF is getting better at sculpting this type of model. There is no fair comparison between the original set and the Vixens. The new set is more posable, more finely sculpted and realistically proportioned. And a variety of final models seems to be much easier to attain with the new set.

The Good: The sculpting is for the most part good and the sprues offer a large variety of final miniatures. The price is also nice with 30 miniatures per box at $20.00 USD. I picked mine up at Gen Con and WF was throwing in an extra sprue with each purchase. Two extra sprues later and I've got 50 zombie women plus several "crawlers".

The Bad: Some of the cloth sculpting is spotty. The joining system can leave very obvious gaps.

The Ugly: The box art and flavor text is crude, badly realized and chauvinistic. This is a good set of useful miniatures and it doesn't need "spiced up" by bad innuendo and out of date sexual stereotypes.

Should I buy these? Yes. Overall I'd say buy these miniatures if you need to fill in or build a large horde of modern zombies. Wargames Factory is making better miniatures than they did a few years ago and I hope that this trend continues. And it would be nice to see a new set of male zombies that look closer to the Zombie Vixens.