Zombie Plague has been a constant in my life for over twelve years. It has been a blast at times and a struggle during others. First created during my college years as a fun, fast board game of zombie goodness it was originally conceived as an old fashioned board game, the kind that your family kept in the top of the hall closet in a long, flat box. The closet that smelled odd because of the coats and boots stored there. It was meant to be a game that you could take down and play easily because everyone already knew the rules. While it has yet to reach this form it has become so much more.

I think the first time I started thinking about it was when Allen Thomas, co creator of Wargods of Aegyptus, was watching a game of Space Hulk at The Game Preserve. At that time I was prone to giving all night movie parties called Zombie Fests so I had zombies on the brain. Eww. Allen mentioned that this sort of game could be adapted to use zombies. And the bulbs started clicking on in my head.


I wrangled Skott Kilander into working with me on a simple rules set (that he pretty much created) and somehow Tom Sawyered the Rodman Brothers at Fortress Figures into sculpting and casting a line of miniatures for it. Ben and Jeff Rodman went to town coming up with character zombie concepts that are still funny, Matt the laying down zombie, Skip the legless zombie etc. Ben started pushing putty and soon there was a whole horde of the undead waiting to be taken out onto the board. I had one human character that I knew I wanted to use, Crissy Hot-Rod, and Jeff and Ben came up with a cheerleader with a chainsaw that we called Chelsea. Timmy came from a project I was working on in college about a kid who couldn't hit a baseball because he needed glasses. And John was the standard tough guy.
I talked some of my artist friends into doing illustrations and Skott drew a map based on his apartment. Kathy Earwood laid the whole thing out and we were in business. Or so we thought.


The biggest problem back then was that the internet that I needed to promote ZP was not fully formed enough yet. My idea was to create a free to download game that would get so popular that we would start making money on the sale of miniatures for it. Jeff put it online via the Fortress Figures site, I created a Cafe Press store and then it seemed to sink quietly into oblivion. I still had my game set and would drag it out occasionally to play at parties, explaining how someday I would have the money to really make a great version of it. But the money never came and the game sat stagnant.


Until Rob Robinson created a Yahoo Group for ZP. I somehow found or was invited to this group and realized that people still seemed to like this little punk rock game that we'd created. It was translated into several different languages. The "open license" copyright that we stuck on it allowed for creative gamers to come up with maps, cards, and new rules that in some cases put our initial version to shame. I am still amazed at how it was embraced and enjoyed by people all over the world. Rob has been very generous with his help with ZP ever since and I truly appreciate his support of the game, attention to detail, and keen ability to find rules issues.


Although I saw that there was interest in ZP I still didn't have the resources to make it into something more finished and whole. Since it's creation I had started telling myself a mental story about the kids that were featured in the game. Crissy was tough and resourceful, John was stoic yet protective of the others. Timmy was determined and Chelsea? Well when Chelsea picked up her chainsaw she was just plain crazy. I wanted to tell these kids' story but still didn't have the means to do so.

Then I started working with Ronda Pattison. Ronda is one of the most prolific comic book colorists in the industry and soon became my close friend and business partner. We decided to create a company to publish our own games and comics and when she asked me what ideas I had I told her about Zombie Plague. She saw ZP as being more whole and ready to work with than my other ideas so we kicked into gear to produce it.


By this time Kickstarter was becoming more useable so we decided to fund not only a comic about the four kids but also revamp the rules. Thus began one of the most stressful and rewarding years of my life as we first promoted ZP on Kickstarter and then worked to make it real. The artist Phibbz Abando came onboard and started cranking out pages to tell the story of ZP in a double sized comic that seemed to stretch in pages every time I re-wrote it. There were some speed bumps with the Kickstarter campaign but eventually these were rolled over and the project kept moving forward. Ronda's belief in me and the project was unshakeable and I'll never be able to repay her for her constant support.

Some of the promo stuff from the Kickstarter campaign:

The story that I've tried to tell with Zombie Plague is pretty simple. What happens when the world goes crazy and you have to rely on yourself and your friends to get out if it? I've wanted to do a zombie comic ever since reading Dead World back in 1987. The few issues that I managed to find back then changed my perception of comics as a medium both in art and in story telling. Main characters died man! That stuff just wasn't really common in my minimal experience. But Dead World was Dead World and I didn't feel the need to reinvent the wheel. Instead I worked with my friend Sean Bellinger on a weird horror comic called Tripe and drew my own classic comic, Nuke-O The Wonder Mutant in Quest for Beer. Both of these only published via our Publication department's photo-copier.

Overall I've grown pretty tired of the most common zombie story. Zombies show up, eat some people, and everybody becomes a jerk to each other. I wanted characters who cared about each other and who would put themselves at risk to save their friends. Deciding on this point made writing the story very easy, these kids would stick together and not devolve into a soap opera squabble-fest. 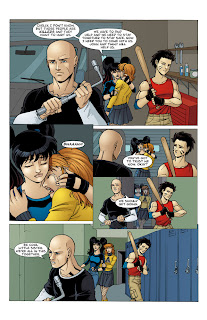 Somehow enough people reached into their hearts and Paypal accounts so that the Kickstarter campaign was successful. These folks are my heroes. And I finally got to write my zombie story. The comic came together with the help of Phibbz Abando and Ryan Howe. My adopted brother Matt Zimmerman helped with the map and everything else. You can pick up an issue here.

I reworked the rules with Rob Robinson's help and included those in the comic. I still wanted to keep some of the feel of the original ZP so I made all of the map pieces, game, cards etc available on our website for free download.

Now we are running another Kickstarter to create new miniatures for Zombie Plague. I'm able to work with one of my favorite miniature sculptors, John Winter, and I've been amazed by the response to the campaign so far. I can't wait to see what John comes up with for the other three characters, they're going to be something special.

So that's where ZP currently stands. Or shambles. Or whatever. There's still more stories to tell about the four kids from Appleton High and I'd love to see the miniature line continue to expand. And maybe someday there will be a long flat box in the top of the hall closet just waiting to be taken down and played. Hopefully it'll be fun and easy because everybody already knows the rules.
Posted by Roebeast at 9:51 PM 2 comments: