To determine the winner of the 200 Likes base contest I created a list of names of the people who responded to my invitation.

There were nine entrants as follows:

Using the fine randomizer RANDOM.ORG I generated a random number as follows.


And it looks like The One lived up to his handle! I'll be sending him the custom 40K base. Yay!

CORRECTION: Mr. The One has decided to skip the 40K base.

This time Random.Org gave me a #2! So Asslessman gets the base!

Thanks to all the entrants and thanks for being a part of Roebeast's Magical House of Sunshine.
Posted by Roebeast at 12:09 PM 6 comments:

Log on to the following post and let me know how you found the Magical House of Sunshine for a chance to win this custom base. I'll be picking a winner at random tomorrow, March 26. 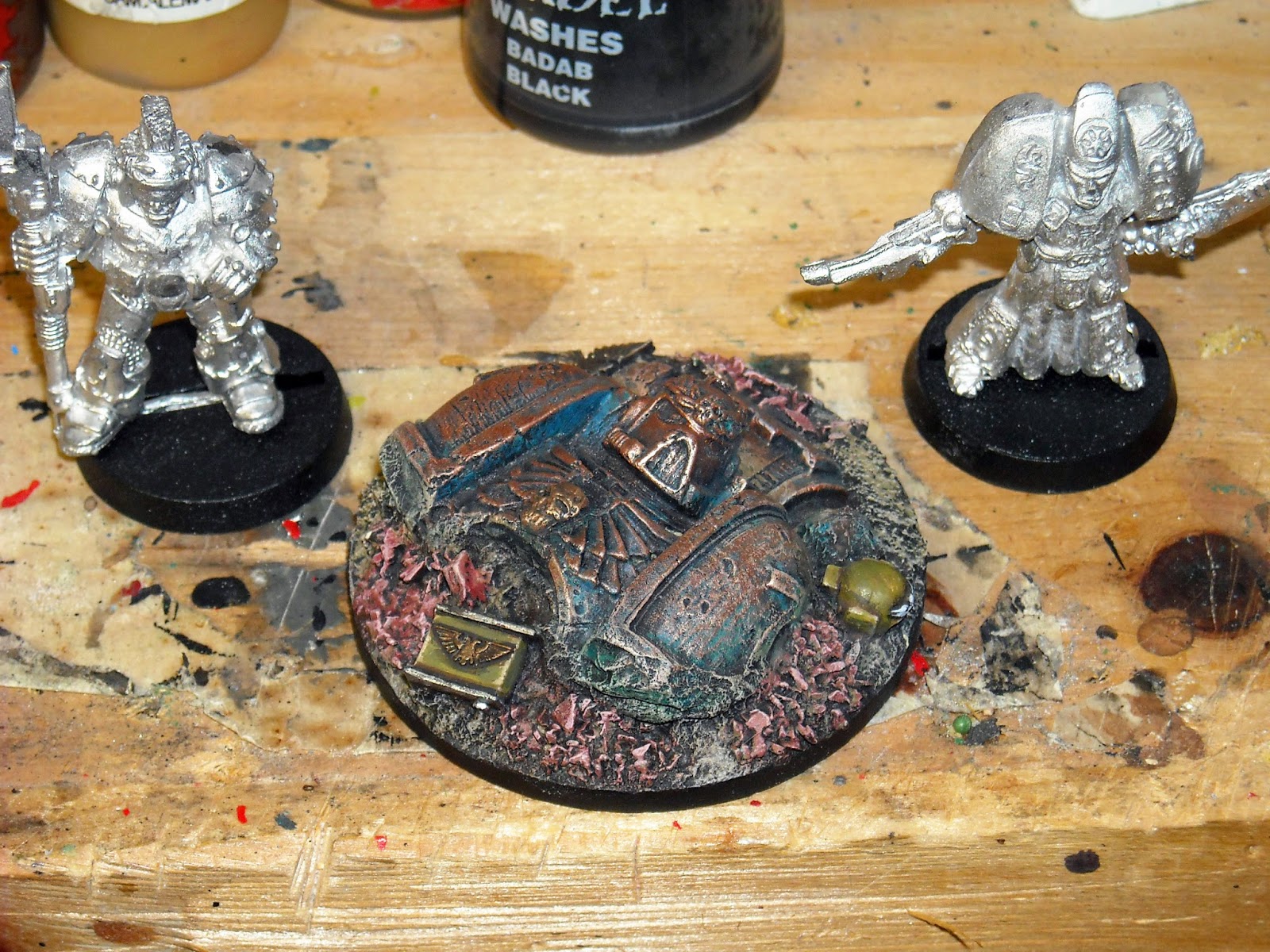 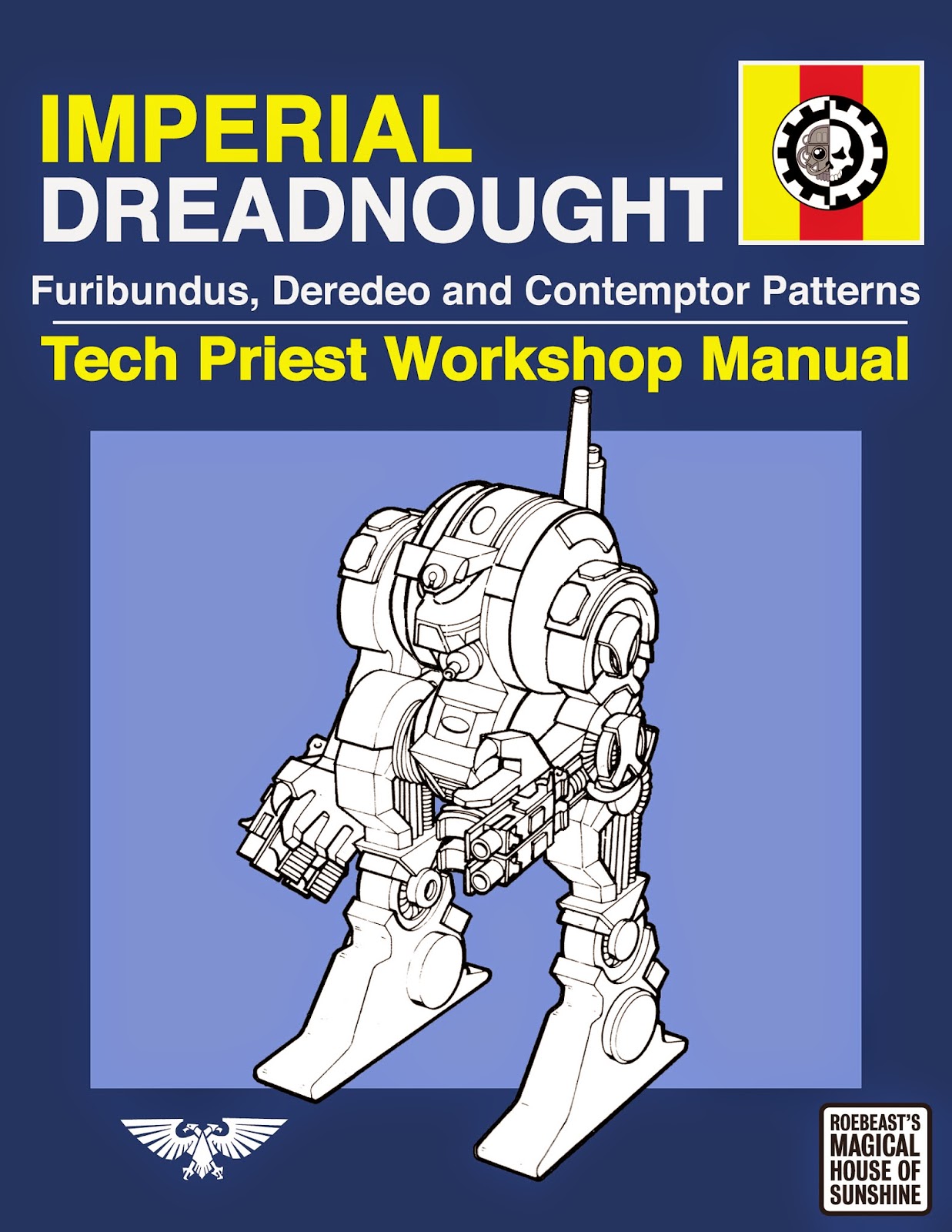 The original Imperial Dreadnought, sculpted by Bob Naismith, for Games Workshop's Warhammer 40,000: Rogue Trader has always been one of my favorite miniatures, possibly because they were being rolled out right at the time that I was first getting into 40K or possibly because they're just so freaking cool.

While reading the dreadnought rules in White Dwarf #100 I came across the following tid-bit about "DREADNOUGHT LEGIONS"!!! Entire armies made up of Naismith's kitty-cat inspired dreads?! Oh yeah, I'm totally into that.

Thanks to Marc Solursh on the Oldhammer Facebook group I aquired a couple of dreads and committed to building a legion. Or at least a unit of five.

The color scheme was discussed on the Facebook forum and I decided on the Golden Knights with both the colors and name coming from my high school, Arlington. I have an idea for a legion icon based on a medieval tilting helmet but haven't really finalized it. 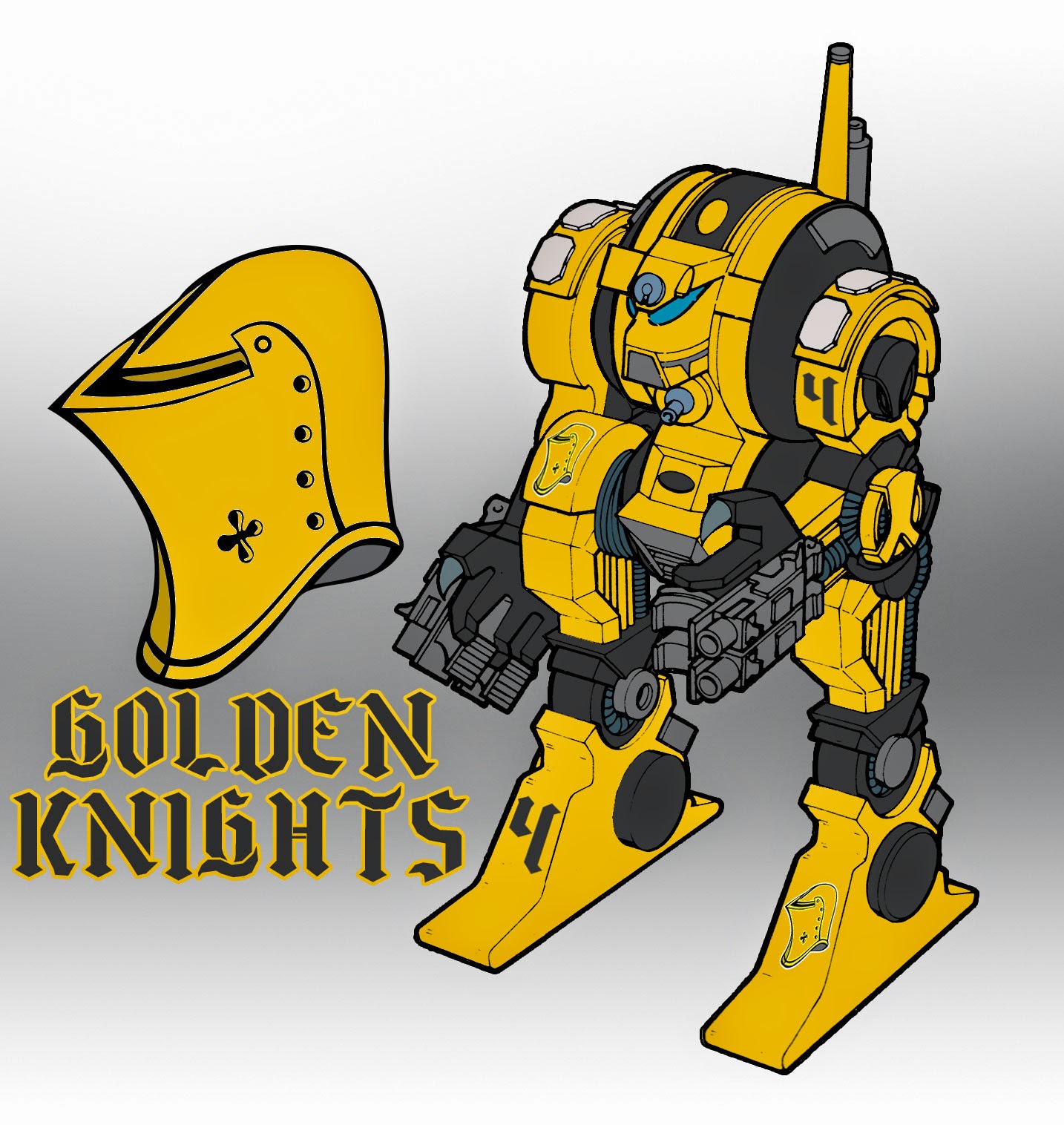 While I was prepping the miniature I made a couple of bases for the future legionnaires. It has come to my attention that these original 40mm plastic bases are sort of hard to come by so if anyone knows of a good source please let me know. Plastic diamond-plate, old plastic weapons, and hand twisted barbed wire cover a base of Milliput on these bases. 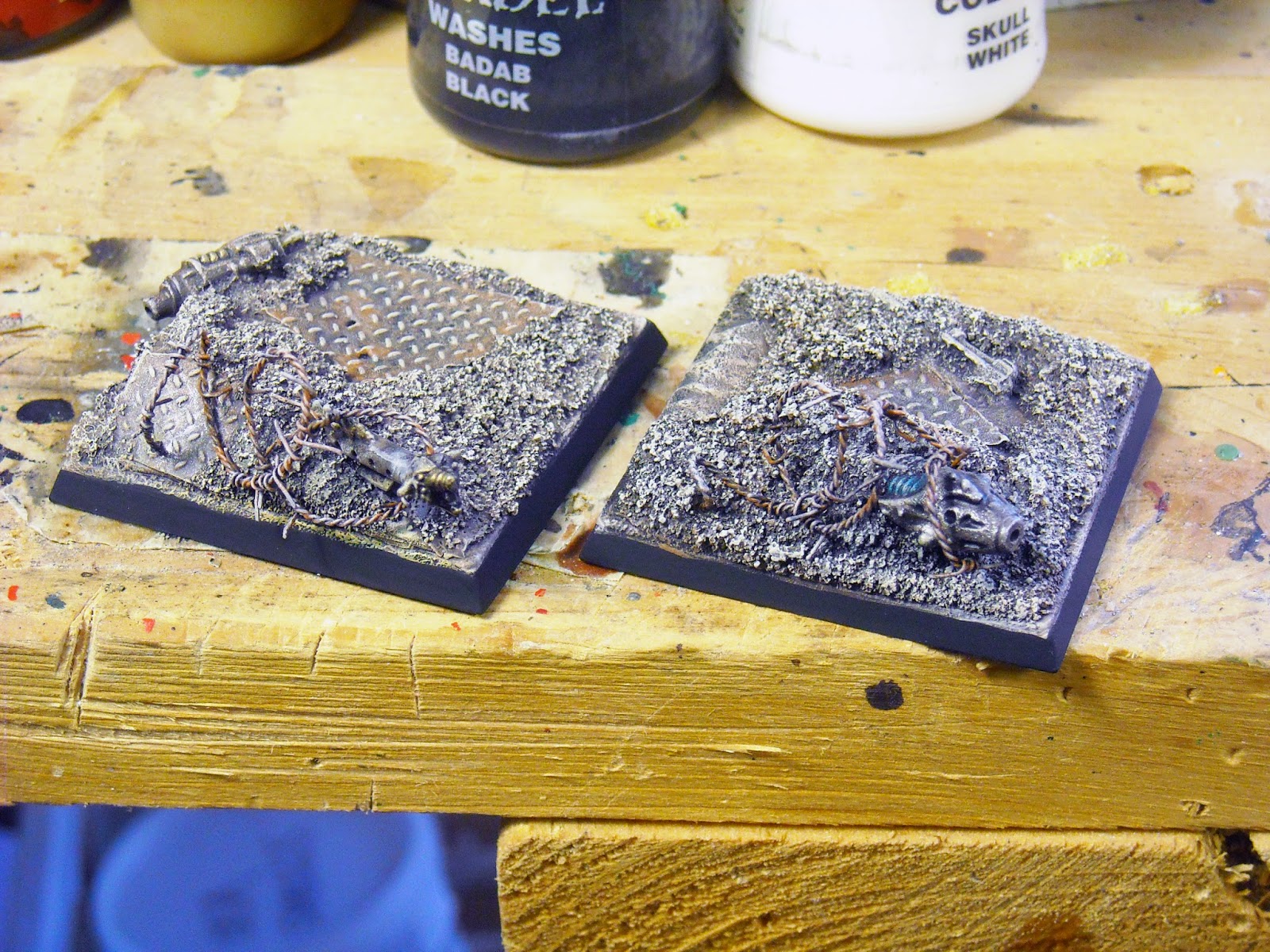 I made a small hill for on one of the bases so I could reposition on of the dread's legs to make it a bit more dynamic and "stompy".

Next up I attached the mini to a specially created "dreadnought cork", using a wooden disc screwed to the top of a cork to give a wider platform to attach the dread to. Luckily this survived pretty well so I'll be able to use it with the other dreads. 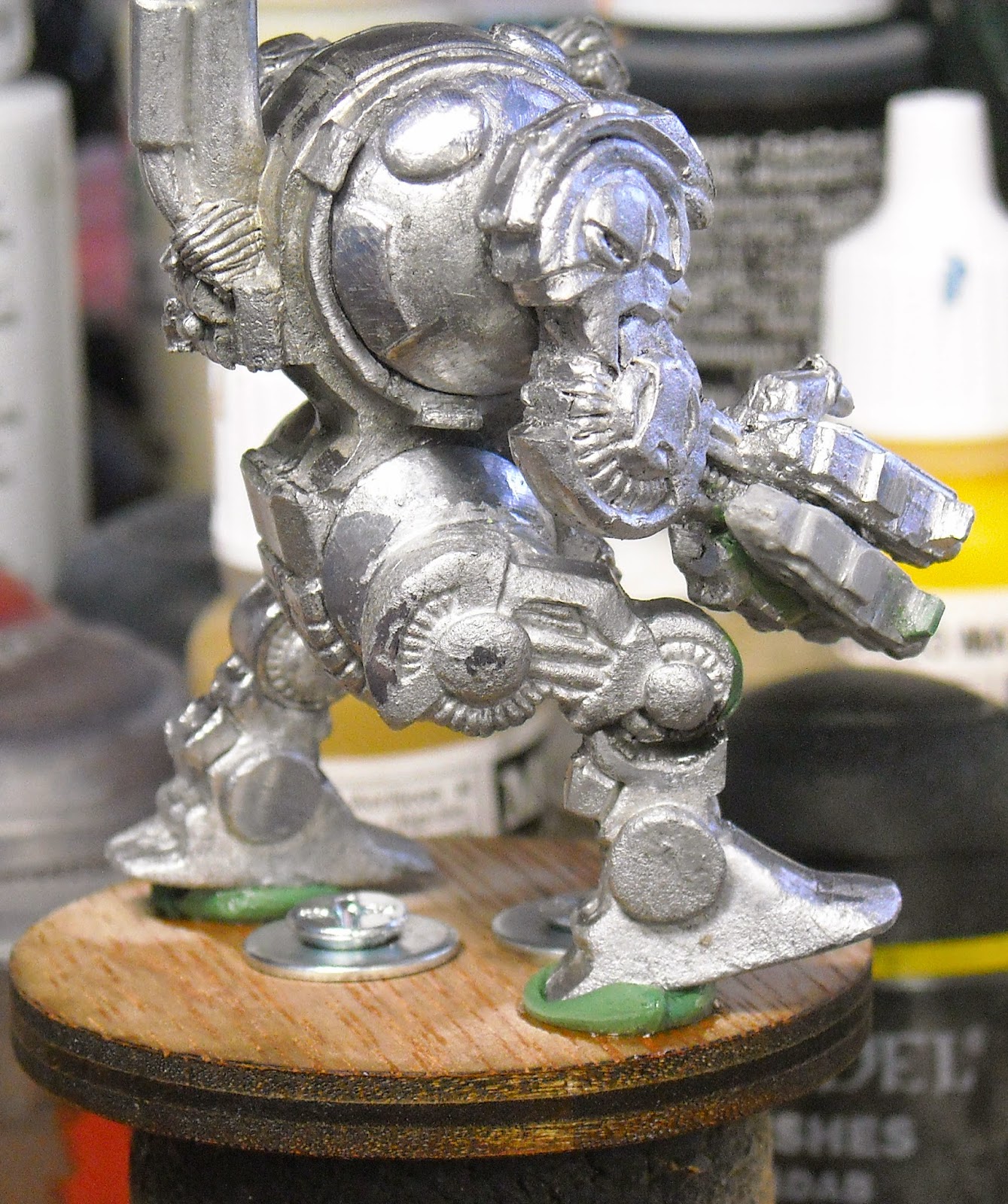 Since I wanted this fellow to be a Contemptor Class I needed to re-create two bolters since the arms I had only had one each. I used Instant Mold Putty and Procreate and am overall pretty happy with how they turned out. You can see how I use Instant Mold here.

Next up was painting and attaching to the base.

Cool FREE stuff from RSquared today! Page 1 of Green Hell is on the RSquared site and Chapter 1 of Deathtrip! is now free on Patreon. Check 'em out and help us out!
Green Hell is the second Yva Starling: Troubleshooter comic and takes place on the deathworld of Verda where Yva must attempt to save a marooned family even as the entire jungle tries to kill and devour them all.
http://www.rsquaredcomics.com/yva/2/?page=1

Deathtrip is the first chapter of Yva Starling Adventure Stories our pulp novelette series. Yva  and a small agricultural colony discover true horror as an escaped bio-terror monster seeks to destroy all life on the planet of Luna Nueva. But not before it has made all of their nightmares real.
https://www.patreon.com/creation?hid=1774691 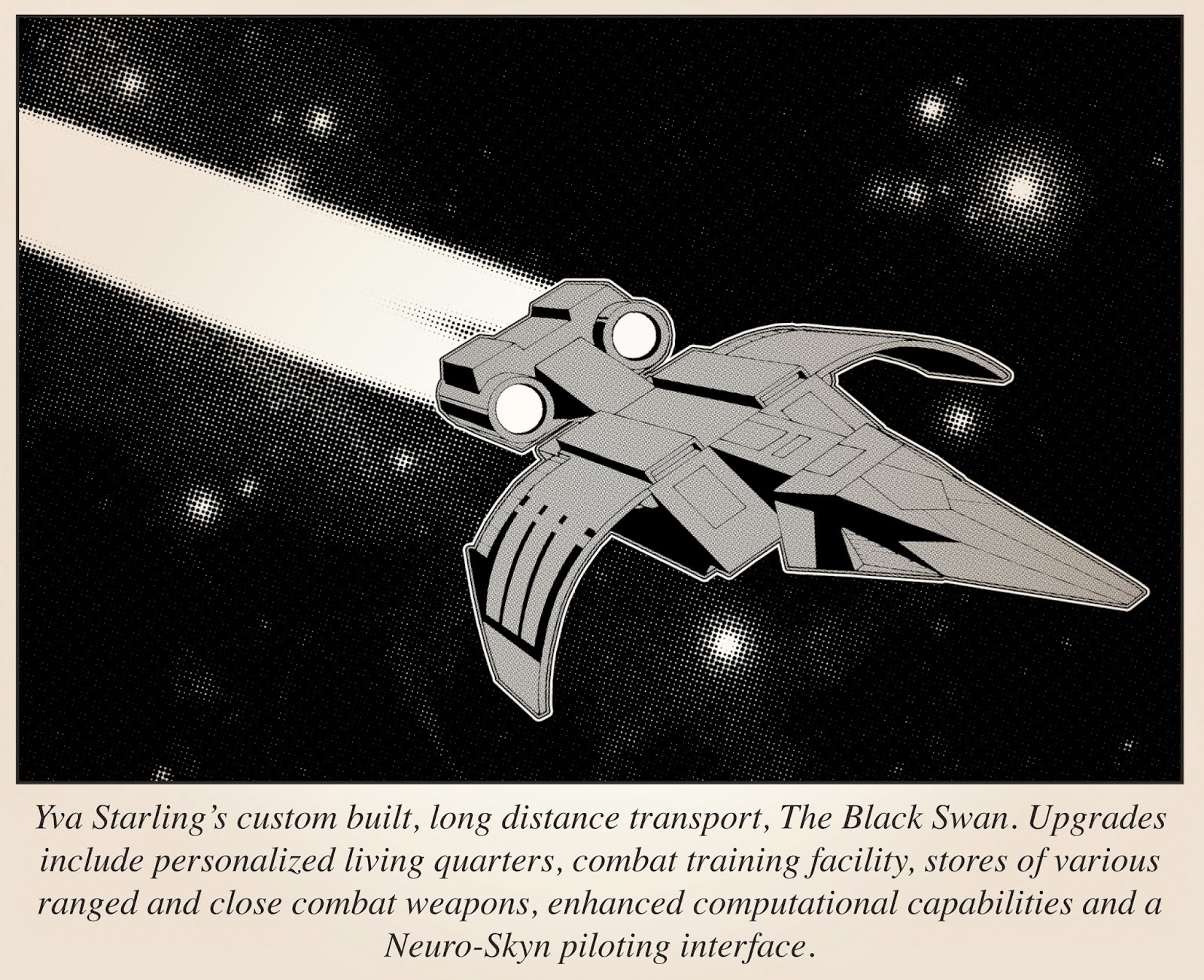 Posted by Roebeast at 9:48 AM No comments:

Over 200 People Hanging out at The Magical House of Sunshine! CONTEST!

I just noticed that there are over 200 fine folks who have decided to spend some time checking out the various stuff I'm making and doing here in the Magical House of Sunshine. That sort of blows my mind. So I've decided to have a brief contest to say thanks.

Back in 2013 I used Instant Mold to make a custom 40K base from a space marine pawn from the board-game Relic. I'd like to give it to one of you!

Just comment on this post and let me know what initially brought you to my blog. I'd like to know what you all like so I can keep doing that! In a couple of weeks I'll randomly pick someone from the comments and send you this lovely, and pre-painted base. (Miniatures for scale only, not included. Sorry, they're my toys.)

Thanks again for hanging out here at the Magical House!

Lots of news happening at RSquared this month!

First up the Yva Starling: Troubleshooter Patreon is live and the first pages have been posted to backers. Please consider coming aboard and helping us to make great comics!

Second we're running a couple of cool offers at the RSquared Store on Zombie Plague miniatures including a free zombie when you buy four humans and a free download of the boardgame rules when you buy any four minis. 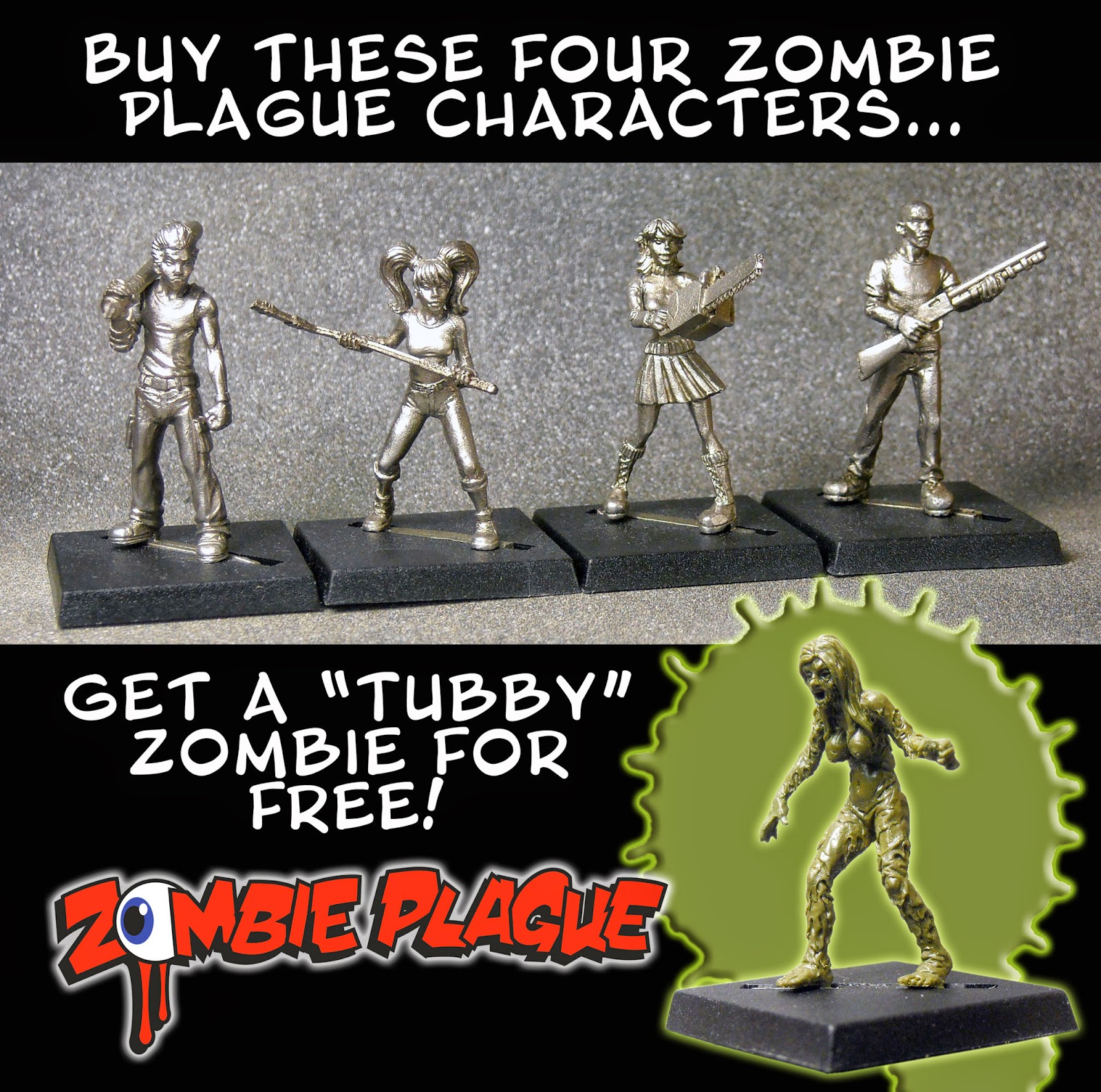 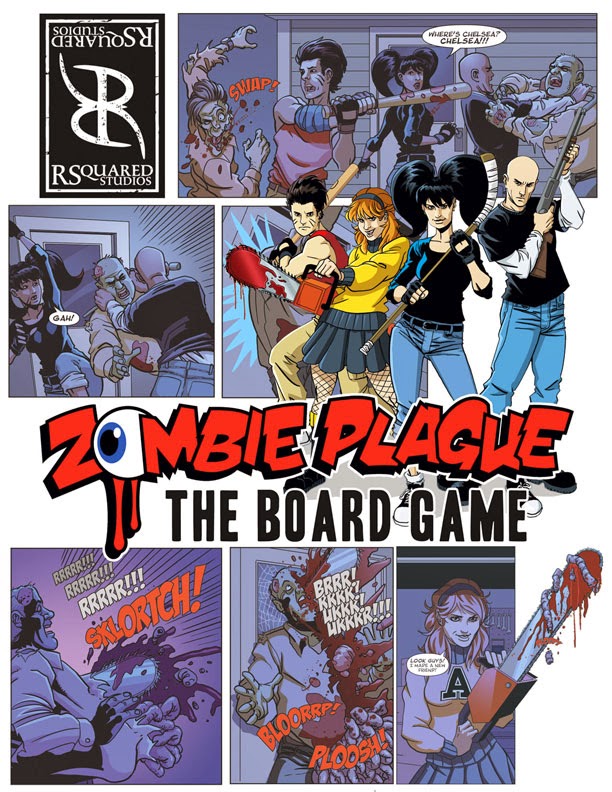 Check out the info here:
http://www.rsquaredcomics.com/blogItem.cfm?blogID=22
Posted by Roebeast at 10:44 AM No comments: