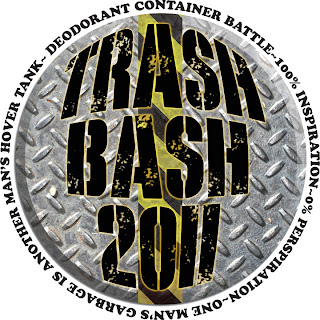 Trash Bash 2011 Contest Rules:
What is This?
In the spirit of Rick Priestley’s classic grav-attack build, this contest challenges converters, hobbyists, and scratchbuilders to create a vehicle to be used for tabletop wargaming using random bits of stuff and a lot of creativity. Many of the skills of being a strong miniature hobbyist will be needed to do well in this contest, not only vehicle construction and painting but also photography, concept creation,miniature painting, and terrain set-up.
What to Enter:
Contestants will construct and paint a miniature of a vehicle designed to be used primarily on the surface of a planet, moon, asteroid, etc. Vehicles can be hover, tracked, wheeled, walker or any other form of propulsion that would primarily be useful on the surface of a planet. Submarine or subterranean vehicles are also eligible. Aircraft and spacecraft are not eligible for this contest.
Each vehicle must contain at least one disposable underarm deodorant container as part of the construction. All other parts can be from any model kits, toys, throw-away plastic items etc or scratchbuilt from other materials. Judges will be looking for clever repurposing of items and skill in making them unrecognizable on the final model. Simply sticking a Leman Russ turret onto a deodorant container will not garner many points.
Other materials such as plasticard, putty, wire, etc are acceptable but fully covered over and sculpted entries will not score well.

Any scale supported by existing miniature ranges is acceptable. This will be necessary for the final picture of your entry unless you wish to sculpt your own troops as well.
A 200 word or less description of your model should be included with each entry. Explain what type of vehicle you have constructed, where it is usually found, what its capabilities are, etc. The scale of your model should be given in this description.


A total of five images must be submitted to be eligible for judging: 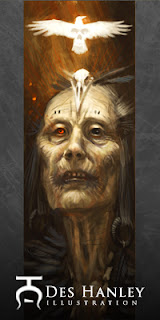 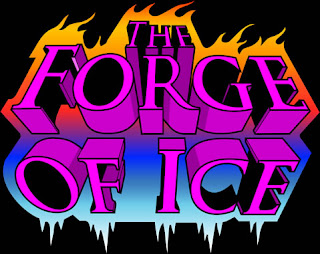 One of my favorite parts of wargaming in the early days was the need to construct most of our own vehicles from scrounged parts. It seemed like a natural cycle somehow that many of the kids I used to play 40K with would repurpose their GI Joe toys into vehicles for Orks or Space Marines. Toys long ago abandoned to the deep recesses of closets and garages were given a second life as bodged together death machines.
I had been building my own robots and spacecraft for years from model kits and junk. So when I found Rogue Trader it was like finding my true tribe. From issue #98 of White Dwarf and  for years afterward I painted and played various chapters of Space Marines. Although I painted far more than I ever played I love the openness of Rogue Trader and the fact that so many of the pieces in the game needed to be created from imagination, junk, and glue. Lots of glue.
The staff of Games Workshop in those days seemed like the coolest people I could imagine. They liked heavy metal, drinking, and playing sci-fi and fantasy games. They seemed smart but not too disciplined and had a work ethic that got things done. And in the early days of Rogue Trader when someone realized that the game had no vehicles to speak of, a brave man armed only with some junk and toy parts hacked together a legend. I am of course referring to Rick Priestley’s deodorant Grav-Attack Vehicle.

Created from said container, spoons, and various Zoids bits this vehicle captured my imagination and led to an extended period of deodorant container shopping. Who cared what the scent was? I was looking for suitable transport for my Space Marine Chapter! (The Archangels sadly fly no more). And as my bits boxes were already overflowing with junk I was quick to get into the gluing and painting of these great little models.

Over the years I developed what I jokingly call “trash bashing”. This involves using primarily discarded plastic bits to make terrain and vehicles for the various games that I wanted to play and rarely had time for. Building stuff was always more important to me than rolling dice anyway. Trash bashing tends to focus more on actual junk than model kits or toys, although these often get used for extra details. There’s a legend that on a dare I even made a piece of terrain from a used coffee filter. But like most legends is probably better left under-researched. Trash bashing was, and still is, great fun to me but it has one drawback: We all tend to accumulate mass quantities of cool looking garbage that never gets used for anything.
It is to address this gaming societal ill that I created the Camel Class Storage Transport or Camel Crawler. The main hull is of course a deodorant container with a scratchbuilt undercarriage and bunches of junk glued onto it. Since I’ve been working on buildings and miniatures based on our comic Yva and the town of Colton’s Curse I thought it would be fun to start building some of the vehicles found around town. This Camel is part of Tasker Mining, a mining company run by the unscrupulous Chad Tasker. Although it is not armed in any way it will be useful for gaming as a moving objective or just good cover. And since I only used bits that I already owned it helped to use up some of my garbage trove.

I based the design on one of my favorite classic arcade games, Moon Patrol, as well as Judge Dredd comics. Early 2000AD stuff is something that we draw from for a lot of Yva’s settings so I wanted something that looked like it was designed by the 2000AD crew. And if I ever get anyone to play the new Judge Dredd miniature game it’ll come in handy in Mega City One as well.

I used a combination of cyanoacrylate glue, JB Weld epoxy, and standard model cement. Bondo polyester putty for gap filling and rebuilding some parts. Sheet and strip styrene for detailing. And a pretty odd collection of other greeblies.

After going over the whole model with sandpaper to roughen the surface, this is especially important with the deodorant container since the plastic it’s made of doesn’t like paint very well, I used Rust-oleum Multicolor Textured spray paint to texture the surface. This gives a very rough and pitted surface, one that is great for drybrushing but might be a little over the top for most vehicles. It works really well for buildings or for a vehicle like the Camel that must endure powerful sandstorms of the planet Coronus. I think it might also work well for any kind of cast metal like Victorian iron plate. 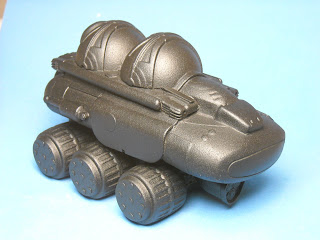 I then used Rust-oleum Ultra Cover Flat Black spray paint to prime it. This is one of my favorite parts of trash bashing, when the first complete coat of primer makes all of the odd looking parts suddenly come together as a cohesive whole. I then drybrushed the daylights out of the thing before adding some grime with Citadel Washes and adding some Tasker Mining signs to the sides. These were printed on an inkjet printer and varnished before being decoupaged onto the sides.
There we have it! The totally trash bashed Camel Crawler ready to roll over the sands of Coronus. Now to make a stega-tank out of my next container of deodorant...
CONTEST ANNOUNCEMENT
This build was so much fun that I’d like to see what my fellow builders can come up with. Beginning on April 1st (no it’s no joke) and ending April 30th I will be accepting entires for the First Annual Roebeast’s Trash Bash Contest! I’ve already got $150 worth of prizes lined up from various companies and a group of gaming celebrity judges to make the big decision.
I’ll be posting complete rules and information next week (March 21st) so you’ve got a month and a half to use up some lovely smelling deodorant and get building. Check back at Roebeast’s Magical House of Sunshine for more information!
Posted by Roebeast at 10:41 AM 9 comments: