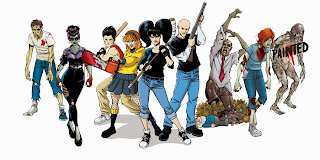 I'll be painting these to a good tabletop level. This means that I want high contrast and clear colors that read quickly from a few feet away. These will look great while playing Zombie Plague but won't win any painting contests.

After the Tubby minis are cleaned and primed it's time to get into the actual painting. The first step is what I call damp-brushing to build up a good base of color without covering all of the black undercoat. Damp brushing leaves a good amount of paint in the brush and will cover well without obscuring detail. The first layer I put down will darken slightly. The next layer is the same color as the first damp brush but is closer to actual dry-brushing with less paint in the brush. I then add some white to the base flesh mix for a third highlight. This is properly dry-brushed to really make the details pop. 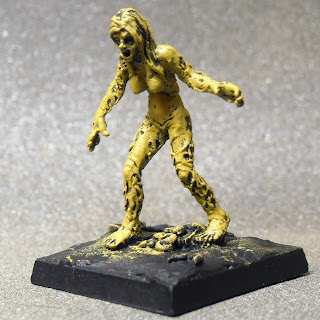 The basic zombie flesh blend I used for Tubby is Vallejo Dark Flesh, a little German Camo Orange Ochre, and a bit of Yellow Green. Since she's basically the same color all over I used a 1/2" flat brush to speed up painting.

Once the base colors have dried for a couple of hours I start applying the washes. The first is a slightly diluted mix of Agrax Earthshade and Thraka Green. I used the big brush again and just made sure to cover the entire mini. 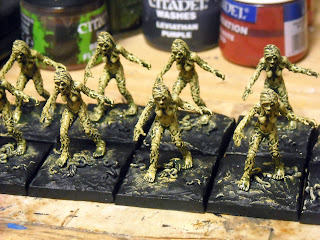 Once the first wash dried I added a layer of Reikland Flesh Shade and then let this dry.


Next up are the various wounds that have been caused by Tubby's bathtub marination. I mixed up a pink with Flesh, Blood Red, and White and then went over the mini looking for obvious areas were the skin seems to be torn or damaged. I did a combination of regular painting and light dry-brushing to make the pink blend into the normal flesh. Then I used a mix of Mechrite Red and Blood Red to paint the centers of the wounds. The wounds were then washed with a mix of Red Ink and Agrax Earthshade. 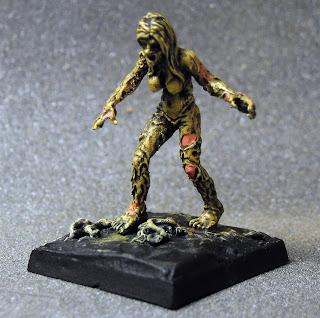 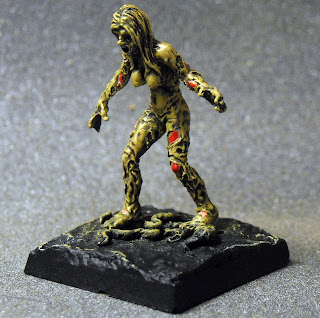 Finishing the rest of the mini is pretty simple from here on out. The hair was painted a dark reddish brown then drybrushed with Khaki. The teeth were picked out with white. Finally a very light drybrush of light greenish flesh was brushed over the entire mini to bring back the detail.

The bases were painted brown and then drybrushed with Sand. The gut piles were painted pink and then washed with a mix of Agrax Earthshade and Red Ink. I'm sorry that I didn't take any pictures of the base finishing but I got going on these and didn't want to stall out the painting session by setting up the camera. 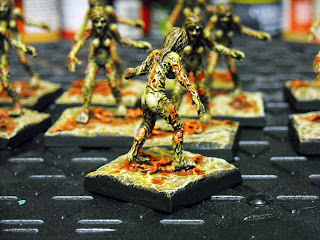 So here's the first finished mini for the Zombie Plague Kickstarter. This was a great mini to start with since John has sculpted such nice detail that basic dry-brushing and washing creates a good overall paint job.

Next up is the unfortunate husband of Tubby, Dirt Nap!
Posted by Roebeast at 2:41 PM No comments:


I've finally been able to send out most of the reward levels from the Zombie Plague Miniatures Kickstarter so now it's time to focus on painting the $100 level rewards. There are ten of these rewards to do with nine figures each. Ninety figures seems like a discouraging number of minis to paint but given proper preparation and planning they will be finished pretty quickly.

Prepping and painting large numbers of miniatures always feels like a meditation exercise to me. We I am properly focused on the task hours slip by and I seem to finish the various steps effortlessly. This zen-like state is one of the things that I miss about being able to paint everyday and something that I'm keen to re-learn.

First up will be Tubby, the unfortunate housewife who after being bitten by her infected husband, decides a nice relaxing bath is all she needs to feel better. Unfortunately she's been in the tub for several days and isn't feeling so fresh.

The Tubby mini will be a pretty easy paintjob and this will help me get my painting chops up before I tackle the other characters. 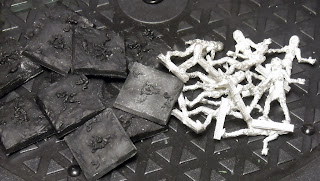 I first start by cleaning the Mud & Gutz bases that I'll be using for all of these painted minis. The casting has been done in such a way that there are very few moldlines. There is a triangular bit of plastic that needs trimmed off of the bottom of most of the bases. Flush cutters work well on this. A quick trim with a hobby knife and some sanding gets the job done. Next up I wash them with dish-soap to get rid of dust, mold release, etc and then let them dry. 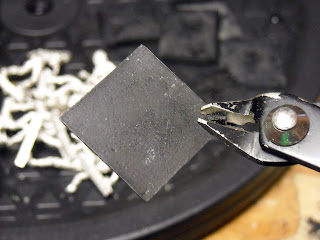 Next I clean up the Tubby minis with a hobby knife and needle file. These have very light mold lines so clean up goes very quickly. I then clip off all of the base tabs so I can pin mount the minis to the bases.

I use three tools to add pins to minis: a needle file to make a clean, flat surface, a needle tool to make a pilot hole, and my trusty pin-vice to drill the hole. With a mini as small as Tubby it can be difficult to drill a deep enough hole because her feet are so small. Make sure you plan your drilling so that you can at least a couple of millimeters into the part. 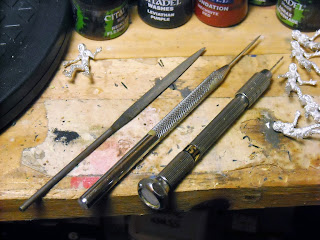 I use an old Citadel Miniature trick for marking the base where I want to drill matching holes for the miniature to fit into. I dip the ends of the two wires into paint and then mark the base. This gives a much better idea of where to drill than just eyeballing it.

The Mud & Gutz bases are designed so that minis straddle the various gut piles but if you have trouble finding good, flat footing you can trim away the extra detail easily with clippers or a hobby knife. I used super glue to mount the wires in the minis and then onto the bases.

Next in Part 2: Priming and Painting!
Posted by Roebeast at 11:44 PM 3 comments:

Quick sketch of a "carrot-man" from World Wasters. I went with the idea that they are like mandrake root with several limbs coming off of the main carrot-shaped body. And for some reason I think that they should talk like Clint Eastwood.

"Umbelliferans are an intelligent ambulatory form of plant life
originating on Beta Kara X in the days of the First Orionion Empire.
Because of their uncanny resemblance, including orange coloration, to
terrestrial carrots, they are sometimes referred to as "carrot-men",
but not usually to their faces. Umbelliferans have extraordinary shooting
skills because of their exceptionally good eye sight." 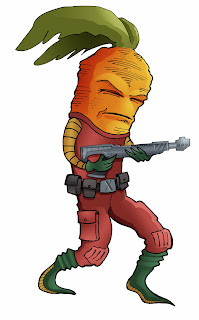 Posted by Roebeast at 6:44 PM No comments: