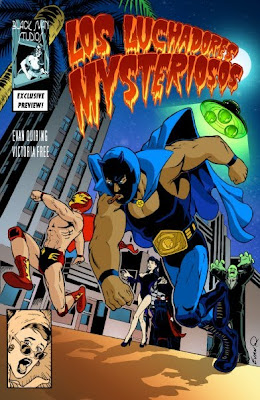 There are men who choose to be heroes and those that are content to watch and admire them. In the world of lucha libre men who are brave and strong enough often don a mascara not to hide their normal face but to allow their hero's face to be seen. The mask is a totemic object that completes the transformation of man into superman. The idea that all men can become superheroic allows even the normal joes in the audience the chance to dream and to aspire to greatness.

In Evan Quiring's new comic Los Luchadores Mysteriosos the two main luchadores don't come across as super heroes as much as a couple of working class dogs who will gladly give their sweat and blood to entertain an audience. Rey Diablo, the cigar chomping heavyweight, and the lighter weight technico Ave de Fuego drive into the town of La Ultima Copa De Triteza on the promise of a paid wrestling gig but instead find a shifty promoter and a town that is totally dead. Although they start an exciting match for the crowd they soon realize that no one is cheering. Then things start to get weird...

I picked up a preview copy at the Central Canada Comic Convention and immediately dug it. Although there are many hints that this book takes place in a larger storyline it is enjoyable on its own and makes me want to read more. A great combination for an exclusive preview. Art and writing, both by Evan Quiring, are solid and enjoyable and the character designs are spot on. The characters look the way that they act. This allows for quick identification with them and is one of the strong suits of good character design. The colors by Victoria Free are bright and solid on the main characters and oddly eerie on the bad guys, again showing a solid handling of the comic medium and a knowledge of how color identifies characters as rapidly as line.

I'm not sure how to get other copies of Los Luchadores Mysteriosos, maybe Evan will post info soon, but I hope he keeps it going.

This book is good solid fun. The luchador that hides deep in my soul approves even as he wants a match against the mucho rudo Rey Diablo. His mask will be mine!

Check out Evan Quiring at:
http://blackswanstudios.ca/
Posted by Roebeast at 4:25 PM No comments: 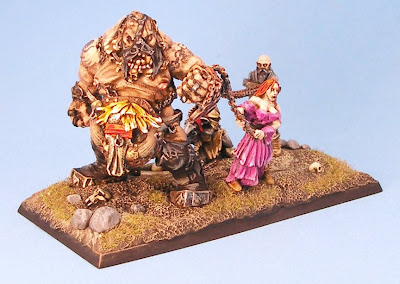 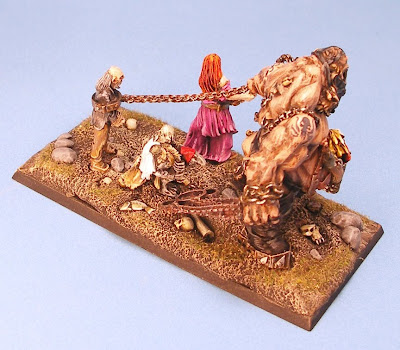 To start this blog off here's a Braugh The Slave Ogre that I painted for B. McWhirt. Apparently these things are super rare and expensive so it was groovy getting a chance to paint one. McWhirt bought the mini for quite a chunk of change and it was partially painted and assembled. I stripped it with Lysol and rebuilt it. Some green stuff groundwork and rocks and then paint. His tattoos are based on the slave master gut plate and chains. If you notice there is a small mouth bass on the base as well. Apparently this is a holdover from Mordheim where there are random fish throughout, maybe rains of fish caused by the warpstone.

Posted by Roebeast at 6:29 PM No comments: