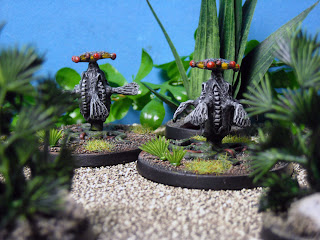 "Objects are eight feet long all over. Six-foot, five-ridged barrel torso three and five-tenths feet central diameter, one foot end diameters. Dark gray, flexible, and infinitely tough. Seven-foot membranous wings of same color, found folded, spread out of furrows between ridges. Wing framework tubular or glandular, of lighter gray, with orifices at wing tips. Spread wings have serrated edge. Around equator, one at central apex of each of the five vertical, stave-like ridges are five systems of light gray flexible arms or tentacles found tightly folded to torso but expansible to maximum length of over three feet. Like arms of primitive crinoid. Single stalks three inches diameter branch after six inches into five substalks, each of which branches after eight inches into small, tapering tentacles or tendrils, giving each stalk a total of twenty-five tentacles.”

"At bottom of torso, rough but dissimilarly functioning counterparts of head arrangements exist. Bulbous light-gray pseudo-neck, without gill suggestions, holds greenish five-pointed starfish arrangement. Tough, muscular arms four feet long and tapering from seven inches diameter at base to about two and five-tenths at point. To each point is attached small end of a greenish five-veined membranous triangle eight inches long and six wide at farther end. This is the paddle, fin, or pseudofoot which has made prints in rocks from a thousand million to fifty or sixty million years old. From inner angles of starfish-arrangement project two-foot reddish tubes tapering from three inches diameter at base to one at tip. Orifices at tips. All these parts infinitely tough and leathery, but extremely flexible. Four-foot arms with paddles undoubtedly used for locomotion of some sort, marine or otherwise. When moved, display suggestions of exaggerated muscularity. As found, all these projections tightly folded over pseudoneck and end of torso, corresponding to projections at other end.” ~H.P. Lovecraft, At The Mountains of Madness.

Here are the first miniatures for my upcoming tabletop wargame Eldritch Empires. This game will focus on great battles that take place in the early history of the planet we now call Earth. Throughout the stories of H.P. Lovecraft he describes conflicts between many of the major races that colonized earth. Since it is highly likely that The Elder Things were the first creatures on Earth and created all of its native life I decided to start with them.

This description of The Elder Things gives a very clear picture of the absolutely alien physiology that Lovecraft imagined these creatures to possess. Although they are highly intelligent and wise creatures they possess no visual cues that would endear them to even the most open minded human. Often in science fiction aliens are of the "prosthetic forehead" type, basically humans with some slight cosmetic difference. Lovecraft's aliens are wholly unlike us in any way and more than likely find us to be just as unsettling and ugly.

In the world of Eldritch Empires these creatures would certainly not call themselves "Elder Things". Instead they prefer a simpler and more elegant title. Amongst themselves they are simply called Makers.

Following this first release will be Maker Troopers with Orgone Blasters, Heavy Weapons Teams, and The Sensei, who are masters of bladed weapons. The Maker army will focus on  technical prowess, intelligent tactics, and the Maker's legendary toughness.