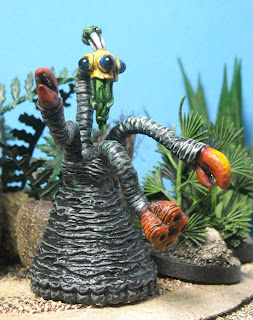 "They seemed to be enormous, iridescent cones, about ten feet high and ten feet wide at the base, and made up of some ridgy, scaly, semi-elastic matter. From their apexes projected four flexible, cylindrical members, each a foot thick, and of a ridgy substance like that of the cones themselves.

These members were sometimes contracted almost to nothing, and sometimes extended to any distance up to about ten feet. Terminating two of them were enormous claws or nippers. At the end of a third were four red, trumpet-like appendages. The fourth terminated in an irregular yellowish globe some two feet in diameter and having three great dark eyes ranged along its central circumference.

Surmounting this head were four slender grey stalks bearing flowerlike appendages, whilst from its nether side dangled eight greenish antennae or tentacles. The great base of the central cone was fringed with a rubbery, grey substance which moved the whole entity through expansion and contraction."~ H.P. Lovecraft, The Shadow Out of Time.

The next miniatures that will be released for Eldritch Empires are The Great Race of Yith. These cone shaped creatures use complex hypnosis to force their own minds into other creatures during various epochs in order to gain knowledge and to extend the lifespan of their race. During the time of Eldritch Empires they are inhabiting the bodies of a species native to earth but one that is destined to be destroyed by the mysterious and terrifying polypous beings that haunt them.

The Great Race of Yith are one of my favorite of Lovecraft's Elder Races. Their desire for knowledge and almost magical levels of science make them incredibly interesting. Lovecraft drops tantalizing hints throughout TSOOT about the world that they inhabit in these cone shaped forms even describing various types of transport vehicles and discussing their ways of war.

"Warfare, largely civil for the last few millennia though sometimes waged against reptilian or octopodic invaders, or against the winged, star-headed Old Ones who centered in the antarctic, was infrequent though infinitely devastating."~ H.P.L.

He mentions their favored weapon as being "camera-like weapons which produced tremendous electrical effects" and although he suggests that these are primarily to deal with the polyps it is not too far of a stretch to imagine them using against their other foes as well.

Lovecraft's biological design of the Yithians is as bizarre as the Elder Things in its seemingly odd combination of parts. Yet when looking at creatures found during the Cambrian Explosion, especially those discovered in the Burgess Shale, it is easy to see how someone with a scientific imagination like Lovecraft could let his mind run riot. Take a look at this brilliant program by David Attenborough to see what I mean: 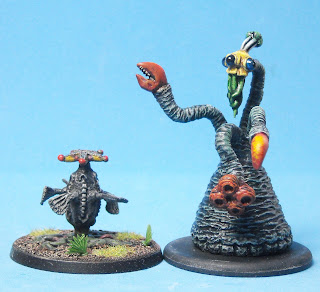 These will be available soon from Nameless Design Miniatures. Price and shipping still to be determined.