I've been wanting to do a walking robot for a while. Primarily inspired by the quirky independent film Automatons, I decided that I wanted to use a walking toy robot and build on top of it. This would create a model that I could paint and detail like a wargaming model but that would still be able to move on its own without all of the hassle of trying to rig the motors myself.
I also got a lot of ideas from the mighty Rob Schrab's video on Drawless Animation, a technique that he uses incredibly well for cartoons and music videos.
So I finally find a decent walking robot for $10 and decide to start hacking and gluing. I've been collecting various bits for a while in preparation for this build so I pretty much had everything on hand. 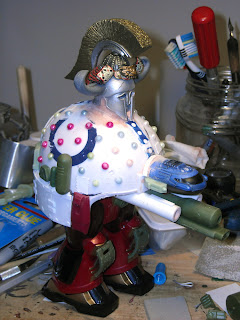 The main carapace is made from a football helmet from a giant Pez dispenser. I built an armored skirt around the back of it with strip styrene. I cut this crudely to make it look more like a battlefield add on. The mulitcolored studs are actually meant for scrapbooking. I found these and other very useful craft stuff in a Canadian dollar store called Dollarama. And honestly, Canadian dollar stores are so much better than the ones down here.  I'm glad that I get to go back up in June for a bit. 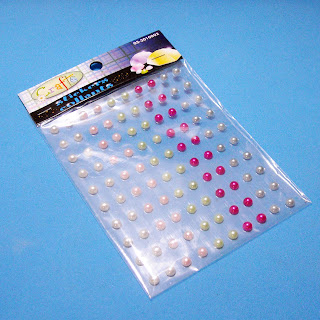 I wanted the helmet to be studded like the shoulder pads on Mark VI Space Marine Armor or like the helmets from Rollerball.
The Corinthian helmet came from a chunky action figure of a soldier from the Trojan War. I'm not saying the helmet was historically accurate, just that it was cheap. The samurai helmet is one of the many odd little bits that I collected when I lived in Japan. The horns are from the horned skull icons from Games Workshop's Arcane Ruins set. 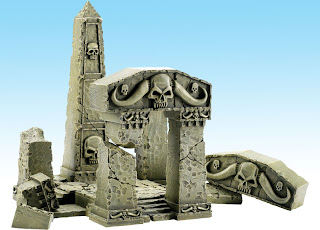 The cockpit is from a toy from the late 1990s called War Planets. These were actually pretty neat little toys that included several types of infantry, aircraft, and vehicles all contained in one little planet. They would have been great fun when I was a kid but I bought them primarily to chop up. 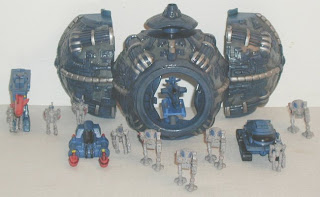 Most of the other bits are from a large scale AT Votoms Scopedog kit. A couple of las cannons from an old style Predator kit and styrene tubing complete the belly guns. A few ball turrets were made with parts from an Acguy kit and an RX-78 Ball. A shield was added to the back made from a Tallgeese shield and a small oni mask made with a push mold.
I added rivets by using various sizes of paper punches to make disks out of thin styrene sheet. I have several sizes of these from a tiny 1.5mm punch to a big 38mm cutter. The standard office punch is usually 6mm or so. My favorite is a Marvy punch that has interchangeable heads. 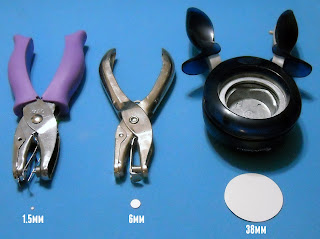 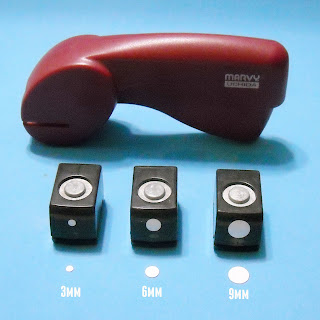 I needed to be able to get to the battery compartment of the robot toy so I made sure to keep the carapace separate. Luckily it rests perfectly on the torso so I don't even need velcro or blue-tak to hold it on. I've been thinking about adding springs to connect them so that there is some movement in the carapace as it walks but this will depend on how it looks in slow motion. 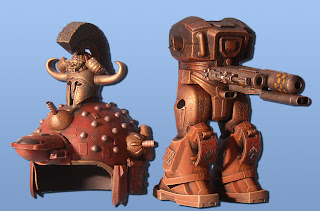 I used a soldering iron to distress and damage as well as to add "welded" plates over the carapace. Once I used the soldering iron I then sanded over the damage areas to keep it from looking as much like simple melted plastic. Then on to painting.
The model was first sprayed with Krylon Texture spraypaint, much like I did with my Camel model, but in more of a misting action as I didn't want a super heavy texture. After this was dried I lightly sanded the whole thing to knock the texture back even more. Flat black undercoat followed by dampbrushing, drybrushing, and then washes with Citadel washes. A few hand painted markings and a couple of small scale decals to break it up a bit. 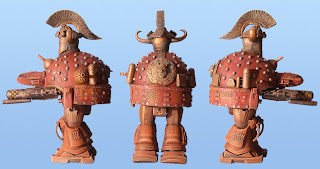 Thanks for checking this project out and please let me know what you think.
Posted by Roebeast at 10:00 PM 4 comments: Links to this post

Just a quick picture of my latest project. This was created to be used in a music video for one of my favorite bands. I'm currently awaiting approval from the band and then he'll be shipped out to Los Angeles to be filmed. I'll post updates as things come together. 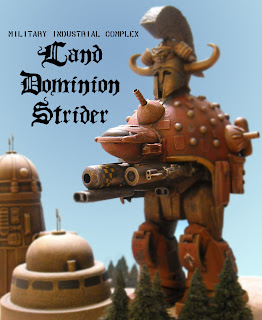 I wanted to create a model that actually walked on its own so I used a cheap plastic robot toy and built everything on top of it. The walking action is actually pretty cool when slowed down. The main carapace is a plastic football helmet from a giant Pez dispenser. The other various bits have been kicking around in my junk boxes for years just waiting for this project. 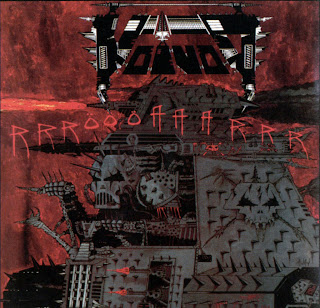 My main inspiration is the artwork of Michel "Away" Langevin from the band Voivod. Voivod's imagery and storylines have always struck me as very gamer friendly. This artwork from the album Rrröööaaarrr could certainly have helped inspire some of the Ork Titans in Adeptus Titanicus. There is an unskilled but extremely cool style that I love about Away's drawings. He's like the metal kid at school who always drew during algebra class and made his own t-shirts. And since I was pretty much one of those kids I've always dug his work.


Next blog I'll show this little beauty unpainted in all its hacked together glory and explain some of the construction techniques.


Remember Trash Bash 2011 ends on April 30 so good luck with your entries!
Posted by Roebeast at 1:16 PM 1 comment: Links to this post

Due to the beneficial machinations of my cohort Des Hanley we can now welcome gaming-overlord Rick Priestley as a judge for Trash Bash 2011. Besides being the primary inspiration for this contest Mr. Priestley's contributions to gaming are pretty much responsible for getting me into the hobby in the first place. And he hasn't slowed down since his departure from Games Workshop. Hail Caesar looks great and has made me consider a nice sized Celt army (since I can't have one in real life).


I'll be accepting entries until April 30th and there's still time for some garbage gluing goodness. So get those bits boxes out and get to Trash Bashing!

Posted by Roebeast at 7:56 AM No comments: Links to this post