In the first episode we are introduced to four middle-school aged friends who are deep into a rousing game of Dungeons & Dragons. Mike, the dungeon-master, is building up to the party's next encounter. After a sly bit of mis-direction he hammers this miniature onto the table.

And it gave me a chill when I saw it.

One of John Dennett's classic Fantasy Lords miniatures sculpted for Grenadier Miniatures and a model that I once owned along with several of John's other creations. To have such a complete nostalgia loop hit me so early in the show created a connection that I'm still sort of buzzing over. And far from being merely a nod or name-check, the "Demogorgon" as its known in the kid's game, remains relevant for the entire show.

So I reached out to John Dennett to learn a bit more about this suddenly remembered classic mini. As always John has been very gracious and helpful when it comes to his fans.

The Demogorgon is now being produced by Mirliton Miniatures in Italy.

NEWS!!! John Dennett is working on a new DEMOGORGON! Check it out here:
http://roebeast.blogspot.com/2016/11/new-dennett-demogorgon-sculpture.html

RB: How long had you been sculpting for Grenadier when you sculpted the “Demogorgon”?

JD: I began working as a free-lance sculptor for Grenadier Models in 1982 and after a few months was offered a full time position at the company sometime in the early Autumn as I recall. The Demogorgon was sculpted in 1984 and released within weeks of my completing it. That was pretty much the way things moved at the company, soon as the sculpture was finished it went to the mold maker and usually within a day or two was spun for initial casting.

RB: Was the miniature sculpted to represent the Demogorgon from Dungeons and Dragons
or meant as more of a generic demon?


JD: At the time I came on board full time at Grenadier, they had ceased their association with TSR on the licensed AD&D figure line. First thing they wanted to do was to phase out the AD&D figure sets and replace them with similar counterparts. We received input from the fans and elsewhere as to which characters were most popular across the RPG environment and usually worked those suggestions into our lines. Demogorgon was one of those. My job was to design a character that could be used as the desired one but keep it different enough to stand on it's own for our purpose of not copying what had gone before. I redesigned the Demogorgon to more of a unique monster in keeping with my stye of art. As I recall I added a second pair of tendrils, extra eyes, crests to the tops of the heads etc. I would have made it larger in scale but there were always restrictions with fitting into our packaging and this needed to seat within the confines of a bister pack.

RB: Any thoughts on the other little demon included in the set?

JD: If you're referring to the little impish creature, that was one of my original designs that was actually released in a few different ways. One had wings, one did not and there was a third with varied features. I don't remember which one ended up in the blister though. 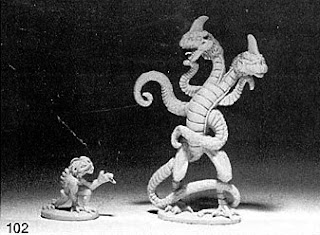 From The Lost Minis Wiki.

RB: What materials was the original sculpted in and how long did it take?

JD: All my originals were sculpted using Atlas Epoxy-Bond epoxy putty as the medium. This was favored for a good many reasons but was durable enough once cured to withstand the Vulcanizing process of high-temperature and pressure in preparing the master molds.

The exact amount of time to create the sculpture was probably 3 working 8 hour days or so. The only things that took longer were the standard dragons, some giants and my War-Bots.

RB: All of your minis push the limits of what can be cast in a two part mold, especially in the 1980s. How much did you learn about casting miniatures before starting to sculpt them?

JD: I was always trying to figure out how things worked and prior to my time at Grenadier I collected toys and models and studied parting-lines and part breakdown. Marx play-set figures were approx. 54mm and the parting lines were prominent. On their larger 6" hard plastic figures it became easier to understand why parting lines were established where they were and how things like surface details became less prominent approaching them. The Marx "Nutty-Mads" series of figures were great educators for me even before getting into the business of designing figures for production.


Once I was at Grenadier I worked closely with Rich Jennings who was the head of the mold making and casting departments to establish what I could "get away with" with the  design and animation of my sculptures.

As I already mentioned, there were several restrictions, mostly packaging related, that limited my ability to create more dynamic sculptures. That and the rule to keep the sculptures as 'one-piece' as possible. That was always tricky! I hated the look of flattened figures that almost patterned the look of Egyptian tomb paintings, even though that was the easiest way to mold them...press the prototype in the the uncured rubber and have minimal build-up to establish parting lines. So I always pushed for more animation where ever I could in my designs.

Rich, to my delight, embraced the chance to to more complex molds and readily accepted all that I presented to him. The size and thickness of my sculptures were always a bone of contention to me. I knew they would be much more impressive if I was allowed to go larger and with additional parts. Ultimately this was one of the reasons I decided to part company with Grenadier in 1986. I felt I had done all I could in 25mm miniatures under those limitations and was anxious to move on and pursue other things artistically.


RB: Have you been watching Stranger Things?

JD: Not as of yet, but I plan to as soon as I get a little free time. I've read nothing but shining reviews on the series so I'm looking forward to binge-watching all episodes once I have the chance.

RB: If you could go back in time to when you sculpted this and say:

”Hey John, this miniature is going to be a really big deal in a very popular series in the year 2016.”, what would your response have been?

JD: Probably my response would have been; "Hope I live long enough to see that happen!"
If I could go back in time and know what I do now, I'd be getting royalties on every thing I created back then for as you know, 32 years later many of my creations are still being produced and sold throughout the world. But really, who knew? I of course am flattered my work has held up through the decades and is still in demand today...maybe more than when first released.

RB: Do you have any interest in sculpting for film and television?

JD: Yes I do and have for a long time. It hasn't happened as of yet but I won't fight the opportunity if it should manifest.  That would be a total blast for me to achieve some screen credit for my artwork after a lifetime of creative design.

RB: What are you currently working on at Moondevil Studio?


JD: I'm constantly creating new sculptures in a wide range of scales targeted at the hobby modeler. These resin model kits are designed, sculpted, molded and cast  by me as not only a source of income but a chance to express myself in sculptural form in ways I had been planning to do all during the years I was working commercially. Commercial work, though it pays the bills, isn't the ideal environment for one who relishes in doing creative design as the majority of the subjects handled commercially are licensed properties with very little or no opportunities to expound on beyond the established style guides. That is why I created Moondevil Studio, to indulge in sculpting my favorite things and offering them to a limited degree to an audience that particularly enjoys my work...even if its a completely unique concept.

At the present time I'm offering my "Imaginary Fiends" line of miniature busts, 1/2 scale busts of Classic Movie Monsters, "Crypto Legends" figures based on mysterious animals not yet proven to exist, and lots more.  New pieces are offered almost on a monthly basis so I keep busy with this in addition to taking on commissions from time to time.

My website is not up to date, which I'll rectify shortly, but I have two pages on Facebook where I post what I'm working on @ "John Dennett" and whats available in kit form @ "John Dennett's Moondevil Studio".

I'd like to thank you Brian, for this little interview concerning my Demogorgon who appears to have become somewhat of a celebrity now that he's been spotlighted on Stranger Things.  And thank you to your readers who took the time to absorb some of my personal history with Grenadier and beyond. Peace!

And special thanks from me to John, my shield-brother Alex Bates, and the fine folks at the Old School Miniature Facebook group.
Posted by Roebeast at 7:43 AM 18 comments: Links to this post

Posted by Roebeast at 5:46 PM No comments: Links to this post